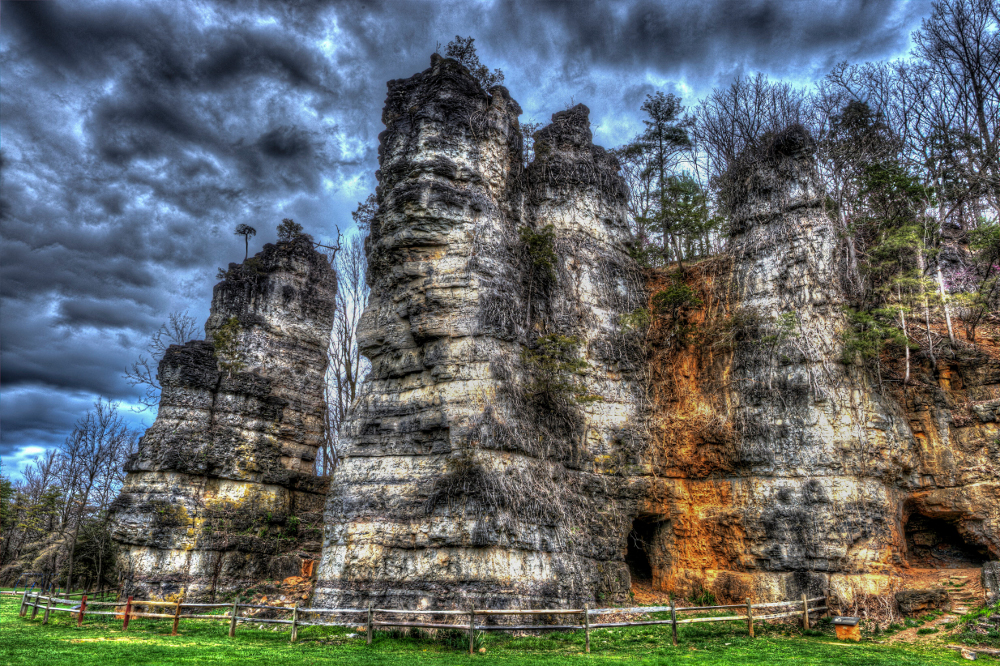 At Natural Chimneys nature displays a record covering five hundred million years of the geological history of our planet.

Though they closely resemble a medieval castle, the term “natural chimneys” is the one most commonly used today. This reference to chimneys can be traced back to the early history of this section of the Shenandoah Valley. The region’s earliest settlers, mostly from Pennsylvania, constructed massive chimney-like structures in which to heat or burn the local limestone for use in agricultural endeavors. After the discovery of iron ore, smelting furnaces, or “chimneys” were built to extract the iron. Prior to the civil war, significant quantities of iron were produced in this area. At this time, the easily accessed ore deposits were exhausted and the men who worked the ore and furnaces left to fight for the Confederacy.

The process by which the chimneys were formed can be broken into the following stages:
(1) The creation of the stone
(2) A period of tremendous geologic upheaval which created the Appalachian Mountains
(3) A period of erosion interspersed with smaller upheavals
(4) The present period- one of additional and continuing erosion.

Having been completely submerged by a vast, but shallow inland sea five hundred million years ago, the chimneys themselves are made up of numerous layers of compacted sediment. Within some of these layers, the fossilized remains of the sea creatures that once thrived here can be found. Equally as important to the formation, and perhaps more important to the preservation of the chimneys were the sponges that inhabited this area. As the sponges grew they secreted a silicone like substance which solidified to form a type of stone that is considerably harder than the sedimentary rock in which it is found. This material is referred to as chert.

The layers of the stone vary in both thickness and color due to the fact that as the temperature of the sea water fluctuated, so did the types and quantities of the marine life within the sea. The darker stone that caps the columns is chert, and since it is much harder than some of the layers beneath, it serves as a protective roof over the formations. Additionally, the chimneys contain a volcanic layer. Originating at a point about ten miles north of the chimneys, volcanic activity was so powerful that it was able to squeeze a layer of lava between two layers of limestone. Throughout the years, water also came into play in turning the chimneys into what they are today. When water flowed through this area, it deposited minerals such as calcium and iron which seeped down into the stone and further hardened it. Through the course of time the chert caps have played a vital role in preserving the chimneys.

The seven towers that comprise Natural Chimneys range in height from 65 to 120 feet and through the level layers of limestone, the chert caps, the lava intrusion, and in the chimneys themselves, nature has left us a record spanning five hundred million years of the geological history of the planet on which we live.