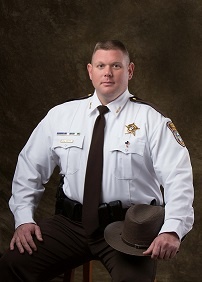 Due to COVID-19, the lobby to the Augusta County Sheriff’s Office is closed to the general public. Only those wishing to speak to the magistrate will be allowed in the lobby, not to exceed 2 at a time. If the lobby is at capacity, you will be asked to wait outside, in your vehicle, or to return at a later time.

If you need to conduct business with the Sheriff’s Office, please adhere to the following tips:

-DELAY BUSINESS MATTERS THAT ARE NOT TIME SENSITIVE

-CALL AUGUSTA COUNTY ECC NON-EMERGENCY NUMBER (540.245.5501) FOR REPORTS THAT CAN BE HANDLED BY PHONE OR UTILIZE THE ONLINE REPORT PORTAL ON OUR WEBPAGE.

-IF YOU NEED A REPORT, OUR CLERK CAN HAVE A DEPUTY DISPATCHED TO THE PARKING LOT TO MEET YOU.

We will still be accepting donations for the elderly. A box is located just inside the front door and can be left there.

Thank you for your patience and understanding during these trying times.

Donald L. Smith was born and raised in Augusta County, Virginia. He graduated with honors from Fort Defiance High School in 2001, and during his free time in school, he participated in the Augusta County Sheriff's Office Ride-Along Program where he shadowed the deputies and learned about their responsibilities. That experience had a tremendous impact and inspired him to pursue a career in public service where he could serve and protect the citizens of Augusta County.

For the past 16 years, Donald has been faithfully serving the community and moving up the leadership ranks within the Sheriff's Office, due to hard work and motivation. He became a Firearms Instructor in 2005 and was assigned to the SWAT team as an operator. He became a Master Deputy in 2006 and because of his leadership and hard work, was the youngest deputy ever in Augusta County to earn the title of Assistant SWAT Commander in 2009.

During his career, Donald has been recognized for his outstanding service and leadership. In 2008, Sheriff Randy Fisher awarded Smith, "Deputy of the Year". He was the first recipient of that honor. In 2009, he was nominated for the "America's Most Wanted" television program All Star of the Year Award. He has since received three Supervisor Commendations and received the Sheriff's Commendation Award in 2014. He has played a crucial role in solving numerous investigations throughout his career and is a mentor and leader for other deputies.

Outside of his law enforcement duties, Donald enjoys farming and spending time with his family. He grew up working on a beef and dairy farm and has continued his family tradition of raising beef cattle. He also believes it is paramount to remain physically fit for his profession and does so by doing CrossFit with several members of the Augusta County Sheriff's Office. He is a member of Verona United Methodist Church and enjoys time spent with his church family.

Free viewers are required for some of the attached documents.
They can be downloaded by clicking on the icons below.